Do you know the definition of “vexillology?”   If you over heard a discussion between two vexillologists (and we’re sure there are at least two of them) it would likely sound like a conversation in some strange alien language.  Well, hold on to your potatoes folks because we’re about to give you a lesson in vexillology, the scientific study of flags.

The study of flags is quite interesting. No, seriously it is.  Just, do a  Google search on the term “gonfalon” and you’ll see tons of examples of what we mean. To learn more about gonfalons check out our gonfalon page.

Gonfalon - an elaborate flag, usually of intricate design hung from a crossbar. Gonfalons can be used for a variety of reasons. Often graduation gonfalons are used at high school or college graduations.

Here are some additional flag terms you may find interesting: 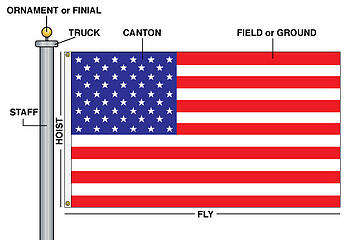 Canton – the upper hoist quarter of a flag (see hoist below)

Charge – an emblem or device added to a flag or shield

Cockade – an ornament (rosette) or other significant colors worn as badge

Field – the background color of a flag or shield

Fimbriation – a thin band of color that separates two other colors

Fly – the half of a flag away from the flagstaff

Hoist – the half of a flag nearest the staff

Staff – the pole from which a flag is flown

Fascinating isn’t it? Don’t forget to search “gonfalon” and may, your un-tattered flag always fly true in a stiff breeze.