How to Display Multiple Flags 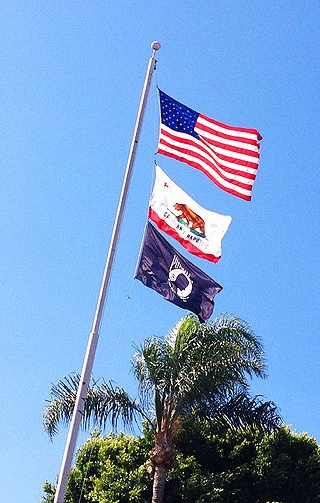 If you have several flags you wish to display, it's important to display them properly. The basic rules for displaying multiple flags in the United States take the following order from left to right:

How To Correctly Retire an American Flag

Are you flying the American flag as part of your Independence Day celebration? If you haven't checked your flag to make sure it's in good repair, now's the perfect time to take it out of storage and give it a good look. Flags that are damaged should be repaired under the United States Flag Code, a comprehensive piece of the full U.S. Code that describes proper interaction with this great symbol of our nation.

And if your flag cannot be repaired, or it is stained or damaged and you don't have the resources to get it fixed, you should never just throw the flag in the trash. There's a proper method for "retiring" the American flag. According to the U.S. Flag Code, it needs to be disposed of in a dignified way, "preferably by burning." Thats right. . . burning.

Retiring the U.S. Flag By Burning

If you are retiring a flag by burning, the Flag Code doesn't give you many details on exactly how to do this. You'll have to turn to the Veterans of Foreign Wars (VFW), an organization that advocates for U.S. Veterans and issues that matter to veterans like proper treatment of the flag, for further instruction.

The VFW has a suggested procedure for retiring a U.S. flag:

If you aren't up for the task yourself, or you're not sure you can give the flag the required respect, the VFW as well as other veterans groups and the Boy Scouts or Girl Scouts can also take flags for proper disposal in a retirement ceremony.

Another reason to rely on the experts: Many of today's flags are made out of synthetic fibers that don't burn like cotton. It may be beneficial to let the experts burn your flag so you aren't exposed to any harmful fumes that may be let off while burning.

Other Methods of Retiring the U.S. Flag

There are other ways to properly -- and respectfully -- retire a flag besides burning. The flag can be:

Of course, once you've properly and respectfully retired your American flag, you'll want to replace it with a new and intact symbol of our nation. We can help you find the best flag for your needs. And, we're there to help with any other types of custom, historical, national or state flags you may need.

. Give us a call to learn more about how we can help!