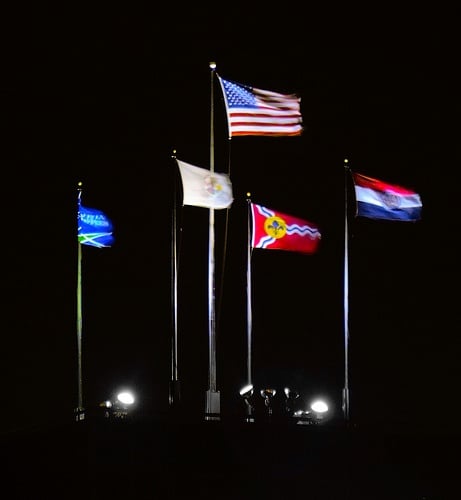 Standards and rules for display of the United States flag are collectively called the United States Flag Code, or 4 U.S.C Chapter 1. Though these rules were formally adopted as law during World War II, none of them are enforced in any way. You can't get penalized for incorrectly handling or displaying a flag, but keeping to the Flag Code shows respect both for the country and for military veterans, who are often intimately familiar with how the flag is supposed to be handled.

There is one matter of legal obligation that flag owners should be aware of, however -- the Freedom to Display the American Flag Act guarantees that a landlord cannot prevent a tenant from displaying the American flag on their rental property in most cases.

When Should The Flag Be Taken Down?

The Flag Code requests that flags not be displayed in bad weather, presumably to prevent wear and tear. Otherwise, the code states that the flag should always be on display, ideally to be raised briskly at dawn and lowered slowly and with ceremony at sunset. Custom is that the flag should never touch the ground; it should be lowered into a waiting set of hands and then folded for storage. The flag can be flown 24 hours a day, but the code requires that it be illuminated after dark.

There are certain days that the flag is always lowered to half-staff, however. These are May 15 (Peace Officers Memorial Day), September 11 (Patriot Day) and December 7 (Pearl Harbor Remembrance Day). The President and individual state governors also have the ability to designate periods in which the flag is flown at half-staff, and this will often happen in the wake of a tragic event. This happens not just for events in America, but in other countries as well; for example, the flag flew at half-staff after terror attacks in France and other locations in 2015 and 2016. There are also various mandatory half-staff periods for the deaths of U.S. officials and foreign dignitaries.

There is no protocol for flags mounted in such a way that they cannot be lowered to half-staff. If they are on a pole, however, the American Legion recommends adding a black ribbon to the top of the pole for that period.

Is There Any Place A Flag Shouldn't Be Hung?

The Flag Code stipulates that the flag should never be draped from a vehicle, aircraft, float or boat. It can be displayed from vehicles if affixed to them by a staff, however.

It should also not be used to cover or obscure something that is about to be unveiled during a ceremony, such as a statue. Needless to say, it is also not supposed to be worn in any way or used as bedding, drapes or a ceiling cover. The flag is also not supposed to be connected with advertising in any way, to include not being flown on the same pole or staff that some form of advertising is present on.

How Should Damage To A Flag Be Handled?

The Flag Code suggests that flags should be regularly mended and cleaned. If the damage to the flag can be recovered by repair or cleaning to make it presentable again, then it is generally OK to do so.

If a flag becomes too decrepit to be displayed, such as becoming tattered or ripped, the Flag Code instructs owners to burn it in a dignified way. On each Flag Day (June 14th), many American Legion posts throughout the country hold a formal flag burning ceremony designed to help people dispose of damaged flags properly. Contact your local post to see if they are holding such an event nearby; they may also be able to suggest alternate means of disposal that are considered proper. Click on this link for our page on flag repair and disposal to learn more.

In addition to creating custom banners and flags, Accent Banner offers a free guide to flag etiquette and regulations that goes into much greater detail, complete with tips for purchase and maintenance of American flags. Feel free to download one today!