The History and Celebration of Flag Day 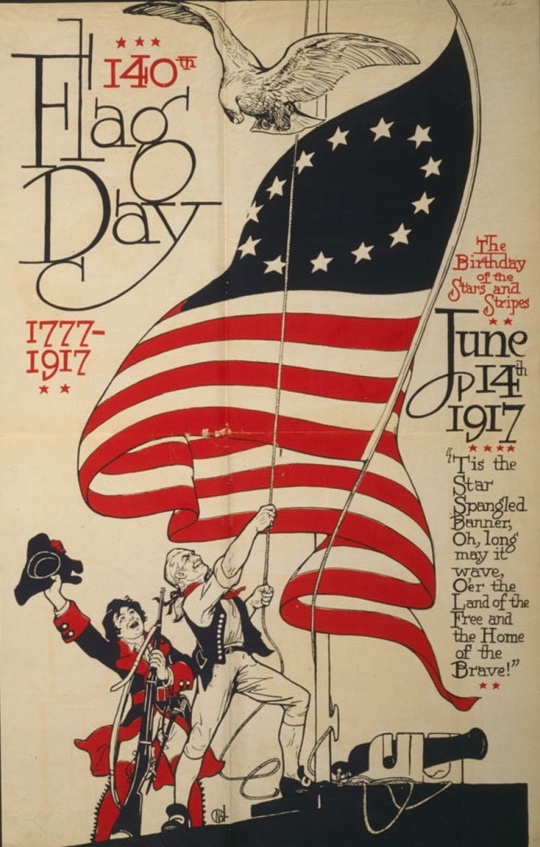 On June 14, 1777 the Continental Congress passed a resolution that would forever solidify the basic design of an iconic symbol - the American flag. Nearly 250 years later, the American flag is a symbol of freedom and hope around the world. In the United States it is flown on civic buildings, in front of homes, at ballfields, and carried in parades and in events by proud military personnel and civilians alike.

"Resolved, That the flag of the United States be made of thirteen stripes, alternate red and white; that the union be thirteen stars, white in a blue field, representing a new Constellation."

While the number of stars has changed over the years to accurately portray the number of  states in the union, the number of stripes has remained the same, serving as a reminder of the humble beginnings of the United States as thirteen colonies fighting for their independence. Since its official creation in 1777 the flag has gone through 27 iterations , though the one that we know today with fifty stars has been the official United States flag since 1960.

In the 19th Century, public school teachers took the initiative to encourage the recognition of the flag's official creation on June 14th. Today, their efforts have been codified as "Flag Day." BJ Cigrand, a teacher in Wisconsin, was the first person to be publicly enthusiastic about making June 14th a day for honoring and recognizing the American flag. In 1885 he had his students celebrate the day, and in the ensuing years he continued to spread the idea of a Flag Day holiday by writing about the holiday in newspapers and magazines. One of his writings was published in the Chicago Argus, giving him a wide audience. He was eventually made Editor-in-Chief of the "American Standard," which provided him a platform to strongly advocate for Flag Day.

Four years after Cigrand's efforts began, George Balch, a teacher in New York took up the cause and began observing Flag Day with his class. Balch's work was noticed by the State Board of Education who began to recognize the holiday. Two years later, the Betsy Ross House celebrated Flag Day, and a year later so did the Sons of the American Revolution of New York. Then, in 1894, New York state obligated all public buildings to display the flag on June 14th. That same year, 30,000 Chicago public school students celebrated Flag Day. Cigrand's work had paid off and Flag Day was gaining much attention.

It wasn't just children who were celebrating the day, either. Government officials had taken notice of the holiday and were doing their part to mark June 14th as Flag Day. One of the more notable instances of such Flag Day observances is that of Secretary of the Interior Franklin Lane in 1914. During his remarks about the American Flag, Lane took a poetic approach, describing that the flag spoke to him, saying, ""I am what you make me; nothing more. I swing before your eyes as a bright gleam of color, a symbol of yourself."

While Flag Day continued to be celebrated by public school children and public officials across the United States, it was not until May of 1916 that Woodrow Wilson signed a proclamation commemorating June 14th as the day on which the American flag's design had been solidified. Even with that proclamation, the holiday wasn't made official until 1949 when President Truman signed a law creating National Flag Day in 1949.

If your American flag is starting to get a little ragged, Flag Day is the perfect time to replace your flag. Contact us today to find the right flag for your home, business, or organization.

The Department of Defense released some good news for domestic flag makers this week. They have decided to prohibit U.S. flags made overseas at U.S.military bases around the world in response to new congressional requirements.  This means that the Department of Defense will be purchasing ONLY American made flags for their military bases and calling the new rule "A symbol of National Pride."